Since the year 2000, I have received the Ferris Magazine. It’s a magazine for alumni who graduated from Ferris State University in Big Rapids, MI. I received my Bachelor’s Degree in Printing Management from there. I have been working on getting a class note placed in the magazine with the announcement that I published or “authored” a book.

After waiting many months, I arrived home from work today with the printed copy of the Fall 2014 edition in my mailbox. I immediately jumped online to see if the electronic version got posted. Sure enough. 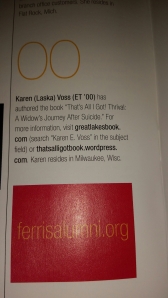 Here’s the link to the full-page class notes posting:
http://www.ferris.edu/HTMLS/alumni/ferrismagazine/archive/2014-fall/#44

Last night I received a phone call from a friend seeking reassurance that she did the right thing.

She had received a message from a friend who threatened to potentially harm himself as a result of a job loss. Not knowing if he was serious or not, she took the initiative and called the police. The police went over to his residence for questioning and later took him to a safe place for evaluation. Because of her concern, he no longer wants contact/friendship with her.

After she told me what happened, she asked if she did the right thing. I informed her that she did. Had she not called the police and he would have inflicted self-harm, she’d carry the guilt for not doing her part to help him.

What’s worse: carrying the guilt around forever or losing a friendship?

I’m proud of her for doing the right thing. She potentially saved another persons life.

She sought me out because I have been on this journey even though I’ve never been in her shoes.